All of this fragmentation means that iOS Apps crash.  CrashKit catches uncaught exceptions, traps signals, and sends them to developers by email or straight to your bug database.

Foursquare dumps a stack trace whenever it crashes.  It then asks the user to email the crash report to the developers the next time they launch the App.

The problem is that the user may not ever launch your App ever again. 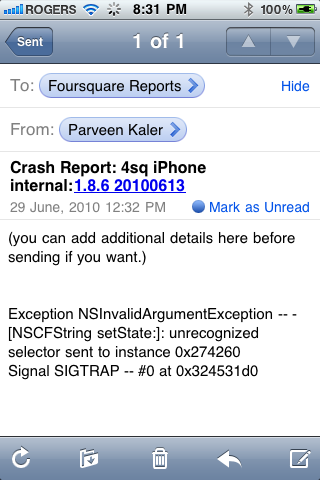 We can do better than this.

The signal handlers unwind the stack frame and try to find out exactly where the crash happened.  This bug report can then be emailed or sent to FogBugz.

There are a number of subtle issues with catching and reporting crashes.  In general, UIKit is not re-entrant.  Also, UIKit methods should only be called on the main thread.  Exceptions and signals are usually trapped on a thread that is not the main thread.  And the main thread usually gets evicted once something catastrophic happens to the App.

CrashKit jumps back to the main thread after catching a crash and grabbing the stack frame.  It then pumps the main run loop until an email message can be sent or a HTTP method can be completed.

LLVM and LLDB are the future.  I’ve only tested CrashKit with LLVM.  There are some LLDB features I would like to add in the future.  CrashKit probably works with GCC but I haven’t really tested it.

The best way to download CrashKit is to check out the GitHub page.  Go put a fork in it.  Crash reporting is hard so patches welcome.